Ask Foghorn: What Are the Different Types of Bullets, and What Do They Do? 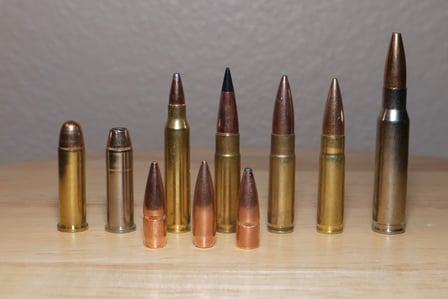 While I'm not exactly a newbie when it comes to *using* firearms, I am a newbie gun *owner*.  And now that I'm in the position of purchasing ammo, I'm finding things to be rather confusing when sorting out all there is to be had. I think I've kind of figured out what I want to buy for my Springfield XD 9mm, but choosing ammo for my AR-15 is proving to be more daunting. How 'bout an article for us newbie-types explaining the differences between, say, "full metal jacket" versus "total metal jacket" versus "jacketed hollow point" versus "jacketed hollow point subsonic" versus "frangible" versus "full metal jacket boat tail" versus "soft point" versus "boat tail hollow point" versus "lead round nose" versus "safety slug" versus...you get my drift.

That's a pretty wide-ranging question, so I'll answer it in three parts. This first part is all about the different types of projectiles, and there are quite a few. But first, in order to explain the different designations, a little about how bullets are made . . . 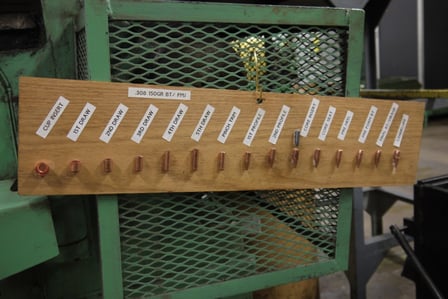 A few weeks back, I took a trip to the Hornady manufacturing plant in Grand Island, Nebraska. It's a good read and I recommend you take a look, but this picture is the one we really want to focus on.

The vast majority of bullets are constructed of a solid lead core and a copper covering (called a "jacket") that contains the lead. Lead is used because it's an extremely dense yet cheap metal, making it perfect for giving projectiles their weight while keeping the overall size small. Copper is used because it is strong enough to keep the softer lead in shape, but is soft enough to allow the rifling to grip the bullet. 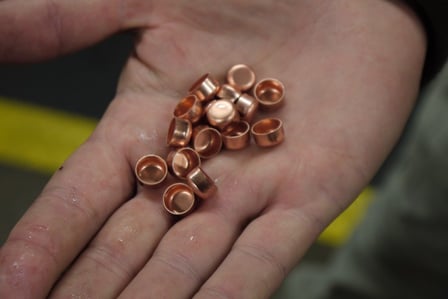 The copper jacket starts out as a cup, having been cut from a long sheet. Through a process called "drawing," the cup is lengthened and shaped to fit the profile of the projectile they're making. These cups will eventually end up as jackets for 5.56 NATO rounds.

However, while this process is very efficient, it's extremely difficult to actually get the metal to encase the entire lead core without any gaps. To keep production costs down, bullet manufacturers usually leave one end of the projectile open. Which end is open - and how that's done - determines the classification of the projectile. 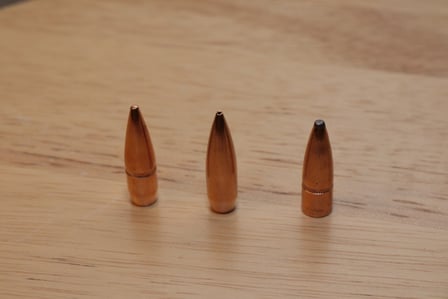 Here are three 150 grain .308 caliber projectiles (a "grain" is a unit of weight that tells how heavy the bullets are). And while they look very similar, the way in which they were manufactured is very different. The first projectile on the left is a "full metal jacket" round with a solid copper point. The other two are an open tip and a soft point bullet respectively, with openings in the copper at the tip of the projectile. 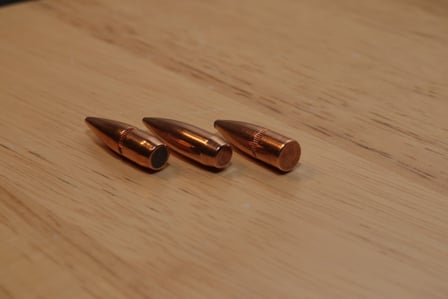 Looking at the bases of the projectiles we can see why they're different. The "full metal jacket" bullet does actually have an opening, but it is at the bottom of the round. So, why are these bullets different? Let's go over each one in turn. 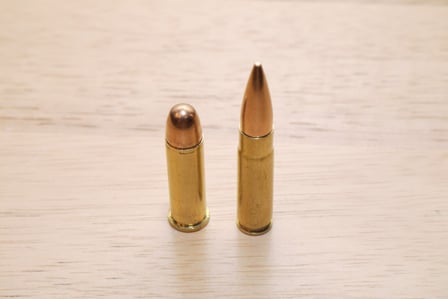 "Full Metal Jacket" or "FMJ" projectiles usually aren't actually "full" metal jacketed, but simply have a copper jacket covering the top of the projectile. Military FMJ ammunition is completely covered by a copper jacket (as per the Hague Conventions), which uses a more involved process than traditional civilian ammunition (but doesn't alter the lethality of the rounds).

FMJ ammunition is manufactured so that the bottom of the original cup of copper becomes the tip of the bullet, producing a continuous jacket of copper over the top of the round. However, most civilian ammunition leaves the base of the lead core uncovered, as illustrated with the bullet on the left in the above images (the ones with the three bullets side by side).

FMJ ammunition is cheap to produce, and therefore is the traditional choice for use on the firing range. The uniform and aerodynamic design of the projectile also makes it the ideal choice for long range precision shooting. However, that streamlined design means that it's also more likely to penetrate a living target (like a human or an animal) and keep going out the other side, possibly injuring people further downrange and leaving only a small wound in the target. Therefore, for home defense and hunting it's not advised to use FMJ ammunition.

There are a couple variations of FMJ ammunition that can be recognized by their designations: 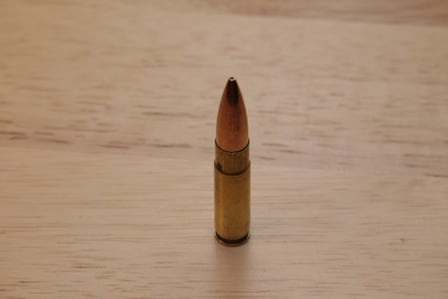 Open tip bullets are preferred by long distance shooters as the manufacturing process is more consistent than with FMJ projectiles, leading to higher quality bullets and better performance at long distance. These projectiles are often referred to as "OTM" or "Open Tip Match" to indicate that they are held to a higher standard than regular ammunition.

Due to the construction of the projectiles, open tip bullets perform nearly identically to FMJ projectiles. 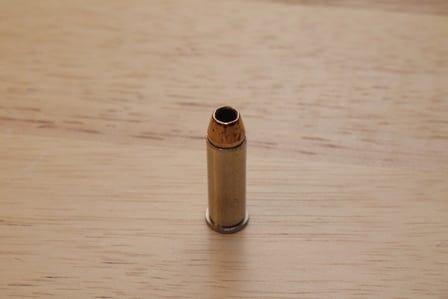 For self defense or hunting, hollow point bullets are the way to go. Following the same general manufacturing process as the "open tip" bullets, these projectiles feature an exaggerated opening at the front of the bullet. The idea is that this opening will force the projectile to expand upon impact with a target, dumping all of the energy of that round and creating a massive wound. However, that gaping hole in the front of the bullet also creates an immense amount of drag and negatively impacts the long range capabilities. 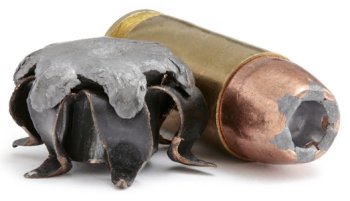 Gun control advocates have successfully branded hollow point rounds as "cop killer" bullets in a couple states and have implemented legislation banning their use based on the claim that they are in fact "armor piercing." However, as we have tested and proven, that's not the case.

Hollow point ammo is the favorite choice for police officers and those who carry a concealed weapon for one simple reason: when they hit something, they stop. They don't keep going like FMJ rounds can and injure people on the other side of the target.

While hollow point ammunition is great for handgun rounds, when you're hunting at longer ranges with a rifle you need a round  with better ballistic properties. One of the first attempts to make a projectile with the accuracy of a FMJ bullet and the "terminal ballistics" (how well it does when it hits a target) of a HP round was the "soft point" bullet.

The main difference between a soft point bullet and an open tip bullet is that with the SP, some of the lead core is protruding from the front of the round. This gives the bullet a more aerodynamic shape than the OTM bullets, and also has a tendency to flatten the projectile when it hits a target. The bullets don't open up as dramatically as a HP round, but it's still better than nothing. Especially where HP rounds are illegal.

But if you're looking for a really good hunting round for your rifle, there's something far better out there than a soft point bullet. 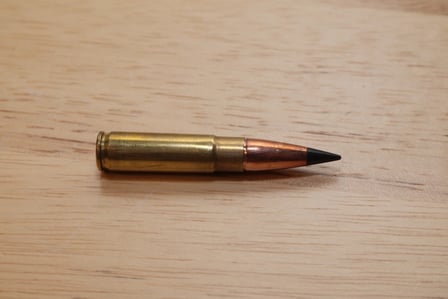 How do you get the benefits of a hollow point with the long range accuracy of a FMJ? By adding a small piece of plastic. "Ballistic tip" bullets feature an exaggerated opening in the tip of the copper jacket to allow the bullet to expand upon impact, but that hole is covered by a cone shaped piece of plastic that allows the bullet to perform as if it were a FMJ. It's a pretty nifty design, and one that I use to great effect in my hunting ammunition. I used a ballistic tip bullet to bring down a deer on opening day of the last hunting season.

While a lead core is the standard for bullet construction, there are some other interesting designs that are purpose built for specific roles. Here are a few:

That's about the long and short of the different types of bullets. Tune in next time for "why does the grain count matter?"