CZ-USA boldly proclaims, promoting their new P-10 C. I'm sure CZ's lawyers would swear that the slogan is all about making their guns better. Clearly, it's a shot over GLOCK's bow. A claim that begs us to nitpick the heck out of this gun. Game on!

small, medium, and large backstraps, two 15-round magazines, a cleaning brush and rod, a factory test target, a cable gun lock, the owner's manual, and . . . a boring-looking gun. Gone are most of the P-07/09 series' aggressive styling cues; the hard lines, angles, tails, rails, swoops, and loops. 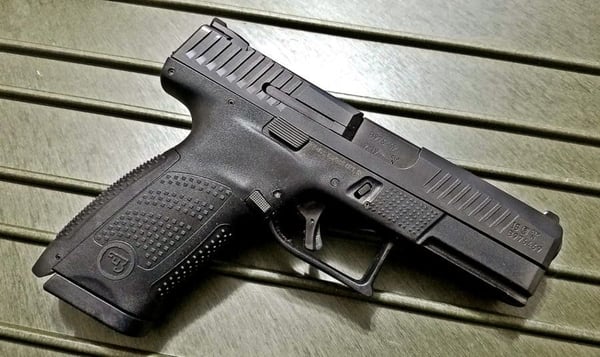 I think Jon of The Gun Collective was right:

if you want to take a chunk of the Civic's market, you create a Corolla. (Well, he was mostly right; the Corolla predates the Civic by six years.) The CZ P-10 C may not be exciting, but neither is Gaston's gat. A little less polarizing and a little more pedestrian can have mass appeal, or at least mass acceptance. 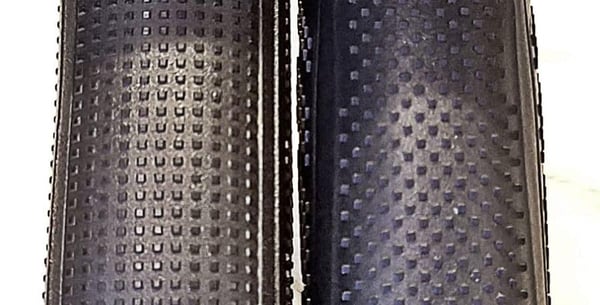 Check out the photo above.

Which is the P-10 C and which is the G19? Time's up! The GLOCK's on the left. It's hard to tell from the photo, but the CZ's grip texture squares are a bit larger and sharper. The corners and edges are closer to true 90° angles. The P-10's grip is just as comfortable as the GLOCK's, even when shooting bare-handed outside in sub-freezing weather. But the CZ is hands-down -- actually, hands stuck right in place -- grippier. 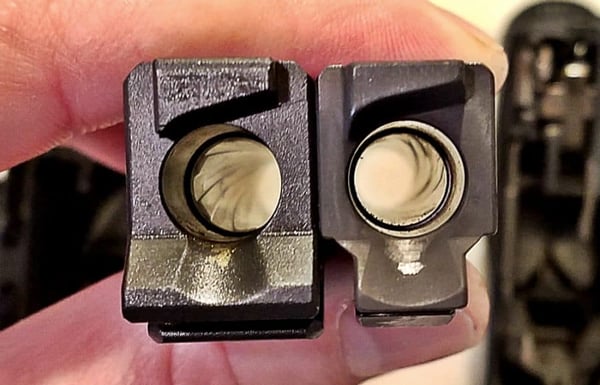 The P-10 C (left) must have the fattest, burliest barrel lugs and locking block to ever appear in a pistol of this sort. It looks like it could eat the GLOCK equivalents (right) for breakfast. 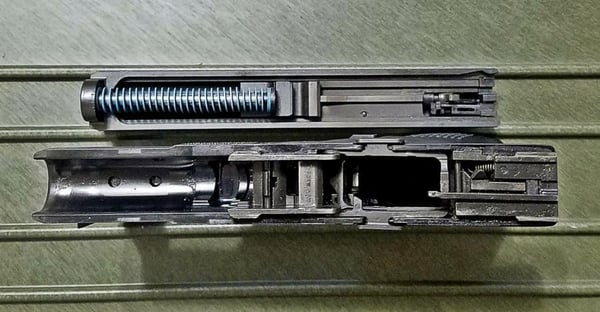 Also up in the nitrided steel slide:

the flat coil recoil spring on a polymer guide rod, the striker and striker block components, a healthy extractor, and the aforementioned land-and-groove rifled barrel with full-width lugs. Slide rail inserts, lugs, pins, and everything else inside the frame is beefy, too. 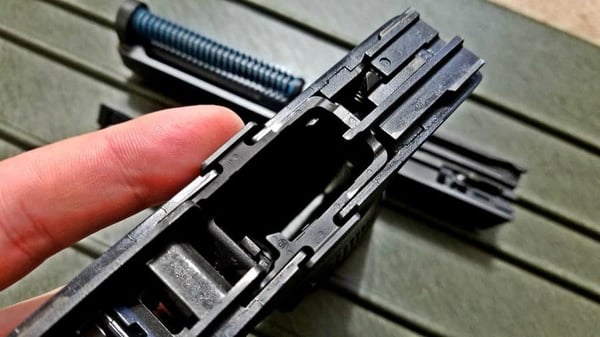 CZ has never paid much attention to tool marks in non-wear, non-visible areas;

The P10-C is cleaner than the norm for them. Note how thick the slide is at the nose where the recoil spring seats. Like the barrel lugs, this is more than twice the steel I'm used to seeing. I feel like I could drive railroad spikes with the P-10's slide components. 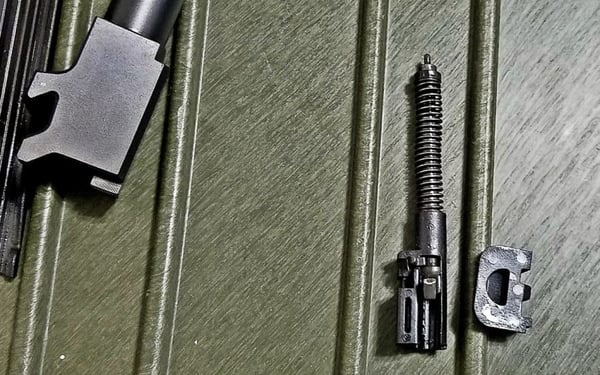 Except for the striker assembly, maybe.

Nothing wrong with it, but I'm sure CZ could have figured out how to include more blocks of steel here. Also a missed opportunity to go with a spade-shaped striker face so even spent brass looks GLOCKed. 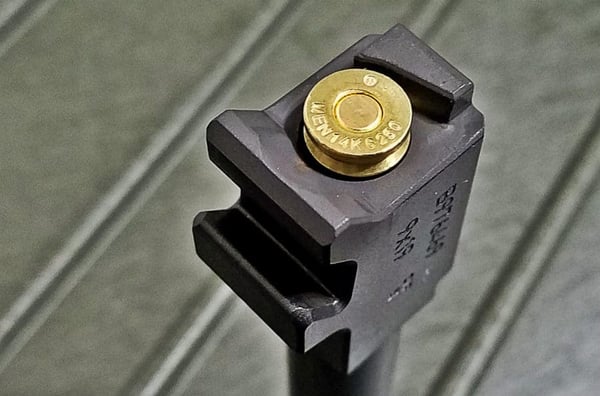 Another characteristic found in fired GLOCK cases (especially from higher pressure rounds): the "GLOCK smile." That's a slight case bulge from the lack of full case support above the feed ramp. CZ chose not to emulate this, either. The P-10 C rocks a very well-supported chamber. It's still generous in its diameter so as to function with utmost reliability -- a match chamber it is not -- but case support is as good as it gets.

You field strip and reassemble the P-10 C exactly as you would a...wait for it...GLOCK.

CZ has molded a single recoil slot into the accessory rail. The rail itself is square rather than weirdly angled, but it's still more reminiscent of the Austrian handgun than other CZs. While we're on Teutonic topic [ED: still], the P-10 C fits most G19 holsters. It's designed to function perfectly in LE/Mil retention holsters such as those produced by Safariland, making a PD's [theoretical] switch from GLOCK to CZ that much easier. 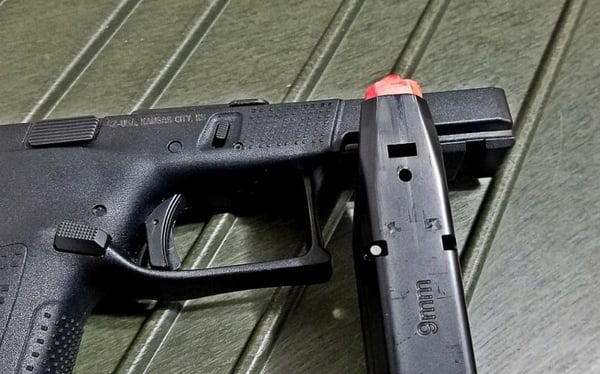 The P-10 C's steel magazines lock into the gun via the rectangular slot on the front face, up near the top. P-10 C mags will work in the P-07, but not yet the other way around. It looks like soon all the P-07/09/10 magazines will have the front rectangle cut and be compatible with each other. In other good news, MSRP on the P-10 C mags is a competitive $35 a pop.

The P-10 C "auto forwards" -- releasing the slide from lock upon firm insertion of a full magazine. Some shooters assume this is an error or a design flaw; it's there on purpose. 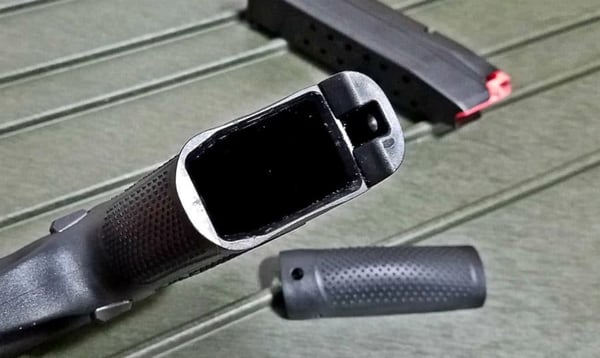 Those mags find an easy home in the grip of the P-10. The frame has some decent magwell taper molded in, and the backstrap extends down to the level of the baseplate of an inserted magazine. Although you shouldn't be missing your mag insertion, the backstrap acts as a backstop funnel for when you do. There's also a lanyard hole.

It lacks silly anodized colors, but otherwise looks like an aftermarket hop-up part. I appreciate the fact that the safety blade depresses to almost flush with the front of the trigger -- so close, CZ, so close. This avoids a pet peeve: when a trigger safety blade goes too far (e.g., Ruger American) or not far enough (e.g., GLOCK). 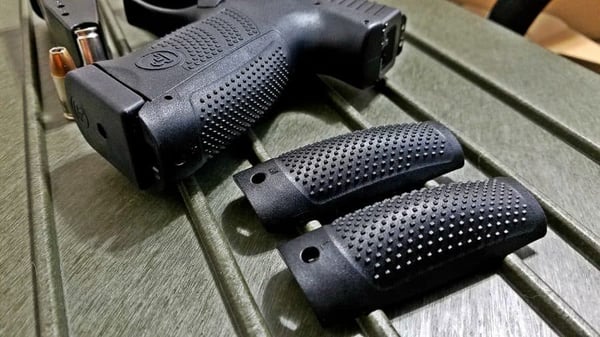 The P-10 C's backstraps aren't just slapped on top of the frame; they slide on a rail. A pin across the bottom locks your hand-size-appropriate backstrap of choice to the frame. 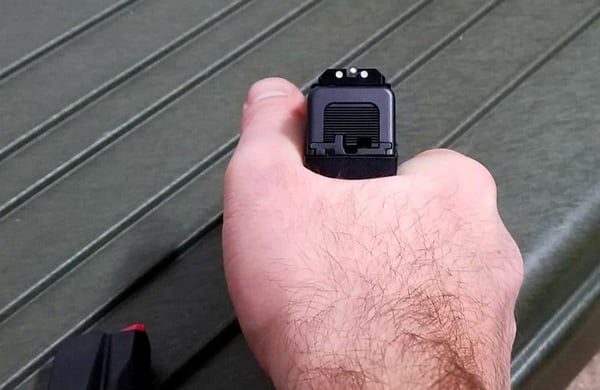 -- but not as high as on a GLOCK® brand GLOCK. The P-10's frame is thicker under the back of the slide. In a massive deviation from CZ's norm, the slide rides outside, not inside, the frame rails. 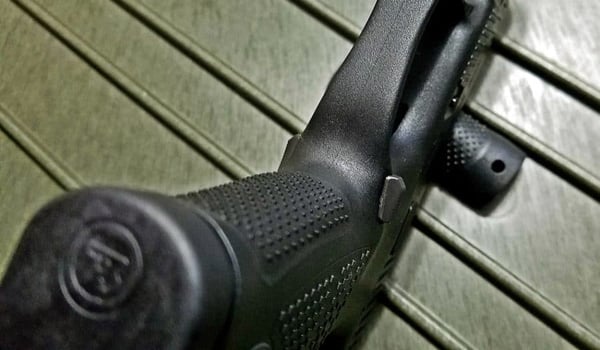 Not to be overlooked:

The shape of the P-10 C's "undercut" trigger guard. It's wide, curved, and deep enough to fit a real person's finger. It completes the confident and comfortable grip feel along with the mini cube texture that keeps hands velcroed in place.

While the ergonomics of the P-10 C's grip shape don't feel the same as a CZ 75's -- a gold standard -- they're still great. Everything comes to together perfectly: the light palm swells, curved backstrap, room under the slide, lack of finger grooves, and a grip angle that points naturally. There are guns I feel I'd have right on target even with my eyes closed. This is one of them. 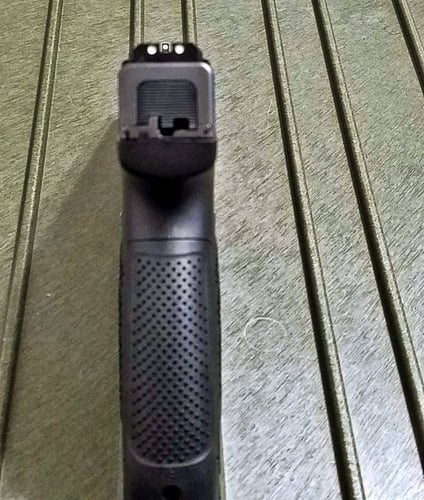 For those who shoot eyes open:

The P-10 C's three-dot sights glow in the dark (after being charged by a light source). They're also machined from steel, rather than popped-out of a plastic mold. Production versions of the P-10 C will use the same dovetail as the CZ Shadow 2, which opens up options for all sorts of adjustable competition sights, tall suppressor sights, and more.

The P-10 C's trigger is a recipe for success. Keep much of the GLOCK's creep but polish it smooth, drop the pull weight down to four-ish pounds, tweak the break so it's cleaner and less "springy," and include a fantastic reset that's tactile, audible, and really short. This is a trigger that begs to be shot fast. 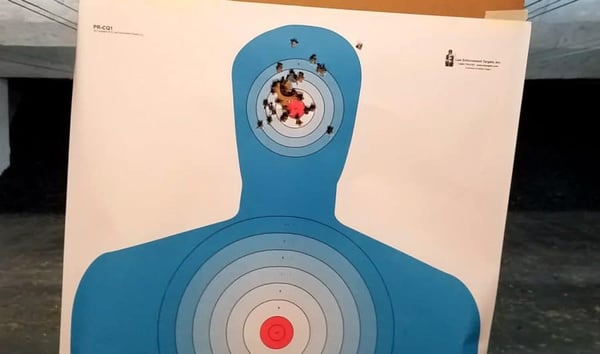 I plowed through the first couple magazines shooting way faster than I normally would. Pop-pop-pop-pop-pop, rapid fire, like I was late getting home. I don't know much about aliens, but it's safe to say that's a dead Avatar dude right there.

This 26-ounce pistol shoots so flat with such great grip control and low muzzle rise that keeping track of the front sight is child's play. Recoil impulse is soft, too. 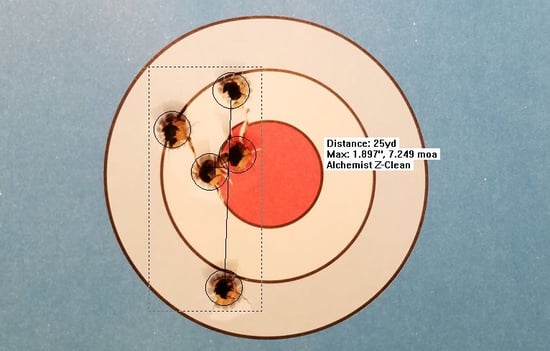 Feeling good about accuracy potential, I plopped out a sandbag, slapped on a Lasermax Spartan, and used it to help me stay on target at 25 yards. Alchemist Z-Clean, which fires a 100 grain zinc projectile, kicked things off with a 1.9", five-shot group. 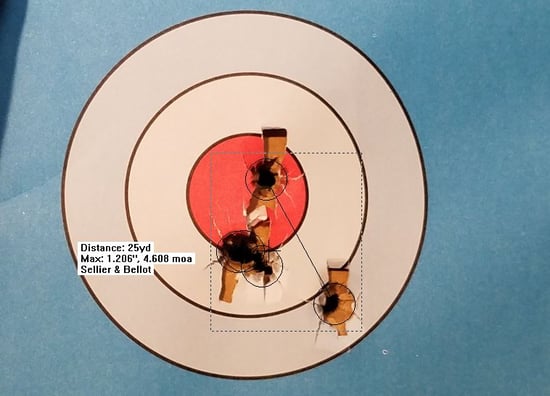 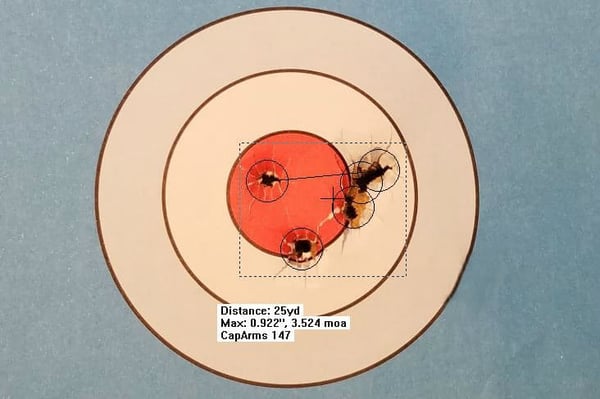 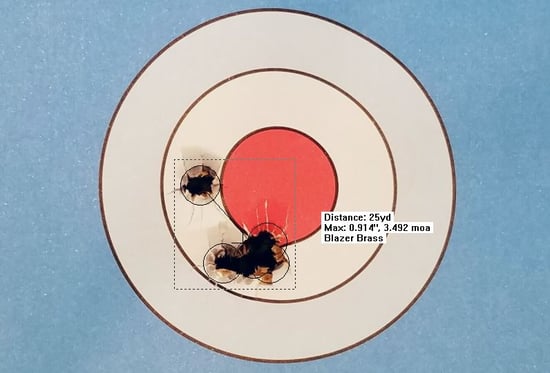 And good ol' 115 grain Blazer Brass effectively tied for first with a 0.91" group, except with four of those shots sharing the same hole I simply must declare it the single-group accuracy winner. This is incredible accuracy from a 4.02"-barreled "duty" pistol. 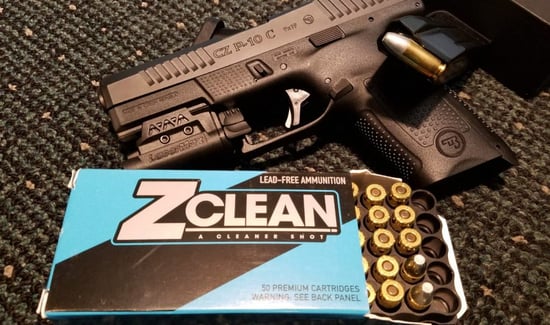 I burned through a few hundred rounds for this review, ranging from the Z-Clean to the cheapest reloads on the market to the 147 grain extra shiny ammo from TTAG's ammo sponsor, CapArms. Not one single hitch or hiccup of any sort. CZ obviously has a good reputation for reliability, and the P-10 C feels bulletproof.

My only functional gripes with the gun:

The slide stop catches firmly and demands concerted force to use as a release, and the magazine release buttons want to be pushed straight inwards, rather than rolled down onto by the thumb. Both of these issues were apparent when paying close attention, but went entirely unnoticed when having fun on the range.

The CZ P-10 C carries like a slightly heavier (2.4 oz heavier, to be exact) G19. While the CZ's frame is taller than the GLOCK's, the difference shrinks to nearly nothing once you insert a magazine. The curved heel of the CZ and the more vertical grip angle may even make that grip heel corner ever-so-slightly less likely to print. 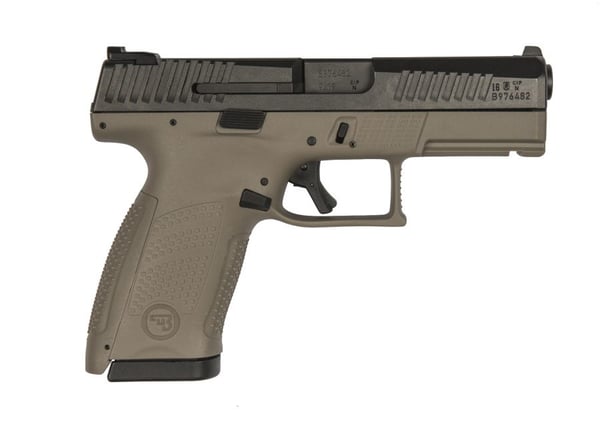 The first wave of production CZ P-10 Cs should be hitting dealer shelves around Christmas. This might even include some FDE variants (as above). After that, expect a .40 S&W model (holding 12+1 rounds) and suppressor-ready flavors.

Bottom line: It's better than a GLOCK 19. It just is. In every last way it's better. The CZ P-10 C shoots flatter, faster, and more accurately. It's more comfortable, points more intuitively, grips better, has a better trigger, better sights, and beefier internals. While I could personally take or leave the fully ambi mag release and slide stop, it's still a plus in the CZ's column. Personally, I like my magazines better sans plastic overmold, too. And at an MSRP of $499, it's less expensive by a hundred bucks.

I did not foresee replacing the G19 MOS on my hip. Least of all, actually, for the P-10 C, which visually underwhelmed me when I first saw it in photos and even in person. But its prowess on the range is undeniable. I shoot it better and more confidently than most other pistols, which is an experience that was also shared among other shooters. Plus who are we kidding, it's still better looking than a GLOCK.

Ratings (out of five stars):

Accuracy * * * * *
In the compact duty gun category, it's a laser beam. Both mechanical accuracy and practical accuracy are incredible.

Reliability * * * * *
Strong, smooth and confident through 300 rounds of mixed ammo and no lubrication at all. I'm heartened by the beefy internals and the general simplicity of the action parts.

Ergonomics * * * *
A marked improvement in every way over the benchmark, but still not CZ's finest.

Customize This * * * *
There's a decent, quality aftermarket for CZ parts and custom work. Sights are easy to swap on this gun and there are quite a few options. Considering it fits GLOCK G19/G17/G22/etc holsters, the market is practically limitless.

An important note: The pistol reviewed here is a pre-production pistol. CZ-USA stated that only two minor things will be changed between this gun and production guns: a slight change to the slide bevel, and the rear sight dovetail will be a Shadow 2 one instead of the P-07 style cut. It's supposed to be identical otherwise.

To be thorough, though, a production one off the distribution racks will be arriving here later this month and another one will be arriving at Tyler Kee's FFL. I want that furry curmudgeon with all his Apex-tuned M&P experience to weigh in on this gun, too. That follow-up article will have Tyler's thoughts plus trigger pull comparisons between the P-10 C and some other pistols, and if anything is materially different between the production guns and this gun then it will be made known here as well.

The 147 grain subsonic 9mm ammunition for this review was provided by CapArms. Their sponsorship of most of TTAG's review-related ammo needs is a huge help, allowing us to review more guns and more gear more thoroughly.

Facebook Twitter Google+
← The Worst Self Defense Advice Ever? What to Tell the 911 Operator in a Defensive Gun Use: Guns for Beginners →