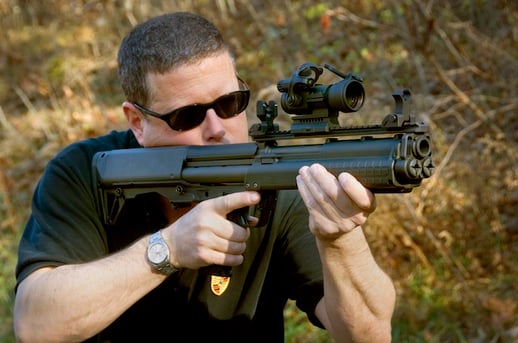 Every now and then an invention completely redefines a genre.

The iPhone. The microwave oven. Snuggies. The Kel-Tec KSG. While the 14+1 round shotgun doesn't instantly render current home defense scatterguns obsolete---wait. There's no getting around it. It does. The KSG has at least three major advantages over any other home defense/tactical shotgun currently on sale to U.S. consumers. For one thing, the Kel-Tec KSG sends a message to all other home defense shotguns: get small or go home . . .

Thanks to its bullpup design (the action sits behind the trigger group) the KSG is one seriously short shotgun.

The Floridian firearm stretches a scant 26.1 inches from stem-to-stern. For comparison, The Remington 887 Nitro Mag Tactical is a 39" gun. O.F. Mossberg's shortest tactical scattergun is the 590 Special Purpose (fans of The Jerk need apply). That piece tapes-in at 38 and 3/8". The least length-challenged Benelli SuperNova measures 45" tip to tail. 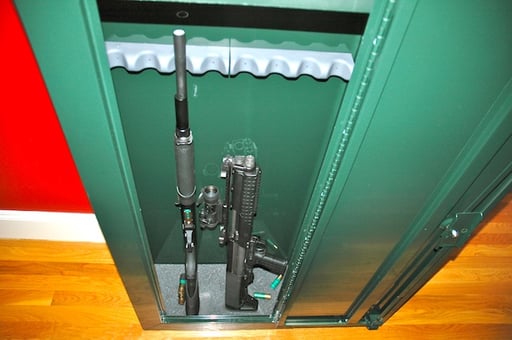 Unless we're including stockless shotguns or the Mossberg "chainsaw"---both of which are better suited for cinematic bartenders than besieged homeowners---the Kel-Tec KSG is roughly half as long as your garden variety one-shot stopper. The obvious indeed unassailable advantage: negotiating tight spaces in your home. Which is made of tight spaces: narrow hallways, stairs, rooms filled with obstacles and doorways. Especially doorways.

With a traditional home defense shotgun, going around a corner sucks.

Either you've got to lower the barrel (raising your response time) or risk having the bad guy grab that big tube and disarm you. Violently. Gabe Suarez recommends removing that threat, violently, by shooting the BG off the end of your gun. Good advise but good luck. You're better off forestalling that possibility by simply running through the "funnel of death" as fast as possible. Sound like fun? I didn't think so.

If you want to walk around your house holding a shotgun, you want the KSG. You need the KSG. You can "pie" a corner (gradually cutting off slices of the visual angle by moving across the space) with your gun ready to rock and roll. You never have to lower the barrel. There's also a psychological advantage; you tend to move a lot faster and more nimbly shouldering a shorter shotgun. Equipped with an "eyes open" red dot scope like the Aimpoint PRO below you can clear your house while maintaining maximum situational awareness. How great is that? Um . . . 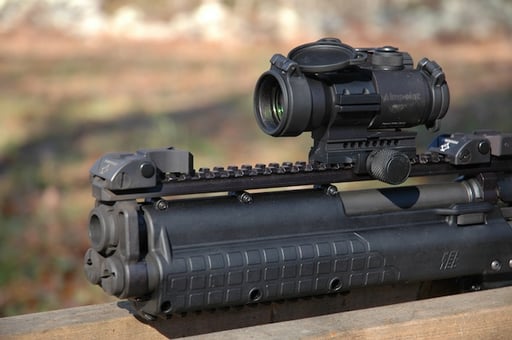 Ideally, you shouldn't be "clearing" your house.

In the event of a home invasion, you should take a defensive position with your shotgun with your loved ones behind you. If you have to retrieve said loved ones before assuming said defensive position, a handgun is a better companion. It leaves a hand free to open doors, gather kiddies, dial 911, fend off or strike a blow, or do the New York Times crossword puzzle while you wait for the police to arrive.

Then again, as my man Phil Fear says, a shotgun is the most devastating close quarters combat (CQB) weapon known to man. Even if we discount the accuracy advantages of a long gun over a handgun, the difference in stopping power is enormous. There are very few meth heads or Mexican cartel soldiers who can withstand a direct hit from a shotgun blast (assuming proper self-defense shells). Two? Gilding the lilly.

So how about fourteen rounds? Make that fifteen.

It's hard to imagine a self-defense problem whose solution requires fifteen shotgun blasts. But one man's excess is another man's reassurance. Besides, the way extra ammo capacity doesn't cost you anything (other than range ammo and cleaning). Or does it? 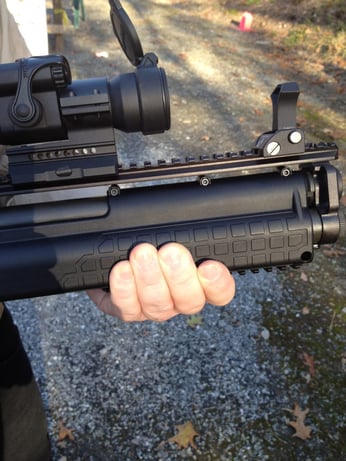 I'm sure no reader of our blog would ever short-stroke (i.e. jam) a pump action shotgun in the heat of battle by failing to vigorously cycle the action through its full range of motion. But people do. All the time. If you don't place your support hand at the very end of the KSG's forward grip (unlike the pic at the top of this post) you WILL short-stroke this shotgun. At that point it doesn't matter how many rounds you loaded before the SHTF. You're screwed.

Kel-Tec's molding a plastic "stopper" to idiot-proof the gun.

This idiot short-stroked the KSG even with my support hand in the proper position. When attempting to unload the KSG for transport, I somehow managed to get a shell behind the ramp that feeds the shells into the barrel(s). I sorted it out by tipping the KSG on its nose, prying the feed ramp away from the back of the gun with a knife, and shoving the shell back into the tube from whence it sprang with my index finger. Not a combat-friendly process. 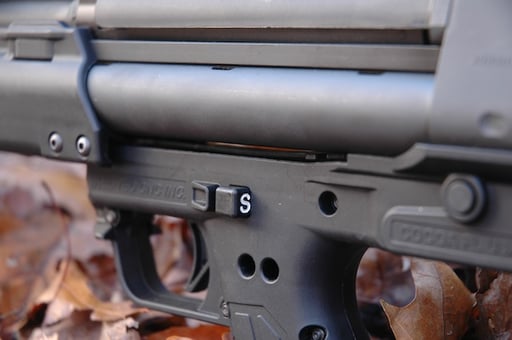 Some gun gurus warn that running the KSG is a generally complicated business. I find the behind-the-trigger thumb safety completely intuitive and ergonomically sound. Loading the KSG is simple enough: turn the gun over, insert seven rounds in one tube, flick the tube selector switch and shove in seven more. If you want that 15th round, rack the slide before loading the first tube.

And here's where things get a little complicated . . .

Let's assume you keep one in the pipe, as God intended. When it comes time to fire, you turn off (push in) the KSG's safety, aim and pull the trigger. You rack the slide the eighth time and pull the trigger. The gun goes click. You reach back with your strong hand or reach over with your support hand (see: demo below), flick the tube selector and . . . nothing. You need to rack again. As in rack, flick, rack, fire. If you've fired a "normal" pump action shotgun all your life, it's a thousand-round reeducation process.

For some reason, everyone who "plays" with a KSG feels the need to loose all fifteen rounds as quickly as possible. When I joined the quick-as-you-can mega-munitions club, an acrid (if sweet smelling) cloud of spent gasses wafted straight into my face, causing me to tear up. "You poor baby" or "a challenge to tactical awareness and a long-term health hazard." We report, you deride.

The ability to load slugs in one of the KSG's tubes. If you need to switch from close-in to long distance love (or lack thereof), a flick of a switch and you're good to go. As long as you remember to rack the slide. You could load the KSG with a mix of lethal and less lethal rounds. What are you meshugga?

You'd have to be crazy to fail to see that the KSG rewrites the rule book for home defense shotguns. There's only one real reason not to buy this shotgun: Kel-Tec's well-earned rep for questionable reliability. OK that and price. $849 is a large chunk of change in a genre known for cheap and cheerful.

But that's about it in the "why not" department.

The KSG makes sense on so many levels it's a "why" gun. As in "why have such a long, heavy, ammo-limited shotgun for home defense when you can have a short, lightweight mondo-ammo firearm?"

RATINGS (out of five stars)

Style * *
It's ugly---especially for those of us raised on the mucho macho stylings of combat shotguns. But like a Citroen DS, it's so ugly it's beautiful.

Ergonomics (Shooting) * * * * *
No more recoil than a standard shotgun; maybe less perceived recoil due to the fact that you naturally tend to jam it into your shoulder.

Reliability * * *
We experienced a couple of jams and the unloading kerfuffle does not inspire confidence. Nor does Kel-Tec's rep for quality. Still, the KSG felt a lot more solid than the SHOT Show prototypes and it's a pretty basic system.

Customizable * * * * *
The rail is your oyster. Or something like that.