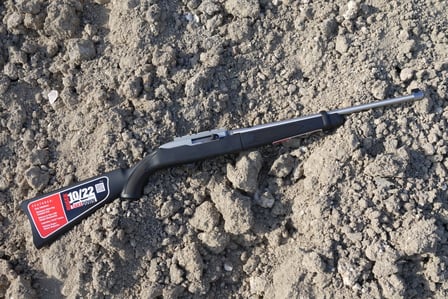 There's little doubt that Ruger's timeless 10/22 auto-loading rifle is the ideal firearm for beginners and has been for decades. A rugged and reliable design that lets shooters accurately put round after round of cheap .22lr ammo downrange, it quickly became the favorite firearm of newbies from coast to coast. But while the 10/22 rifle has been around since the 1960s, not much about it had really changed. It was the same old rifle, albeit with some different window dressing for different models. There really hadn't been any updates to the mechanism. Until now . . .

There are two minor issues that I've had with the original 10/22 design, issues which have kept me from plunking down the $300 or so that it takes to bring one home.

First was that it was a pain to clean. The design of the 10/22's receiver is such that disassembling it for a thorough cleaning isn't really a viable option. Call me crazy, but my disassembly procedure for cleaning a gun usually stops when something needs to be drifted out with a hammer and punch. I'll usually just squirt some CLP in the action and call it a day.

Second, while the gun had the minimum required 16 inches of barrel length and hardly a micrometer more, it was still a little on the large side. One of my friends back in Virginia was looking to buy her first gun, but she needed it to fit in the storage space of a soft top Jeep Wrangler. Anyone who knows that car knows that the storage compartment is big enough for a sandwich, a European-sized can of Coke and  not much more. The standard 10/22 she wanted simply would not fit. 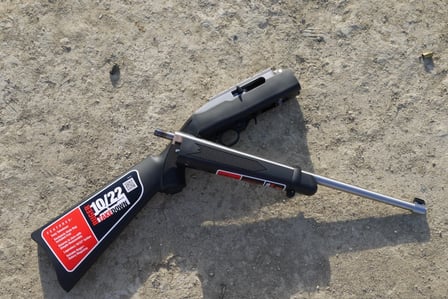 We first saw this at the NRA show and after many months of waiting, the rifle finally showed up at my FFL. When it finally arrived, my gun store gal couldn't believe her eyes. She had never seen one before and damn near entered the thing into her book as a "pistol" before she realized what she had.

The 10/22 Takedown is designed for those who simply don't have the space for a full size rifle.

For example, maybe you live in one of those capsule hotels. Or you ride a motorcycle and don't want to roll down the street with a full sized rifle bag conspicuously strapped to your back.

The barrel is the longest part of this rifle, clocking in at 18.50 inches. That means you can stuff it into almost any backpack and head to the range with your neighbors being none the wiser. Forget having to hide your heater in a guitar case, if you have a Takedown, a violin case will more than do the trick.

One side effect of having a smaller overall size is that it also becomes a very viable option as a survival firearm. Simply throw it in the trunk of your car and forget about it. Or dump it in one of the millions of compartments of your Cessna 172 before taking off to ensure you don't starve to death before SAR gets to you.

The only thing that really compares is the Henry AR-7, which was specifically designed for survival situations.

That single-minded focus on survival, though, keeps the AR-7 off my list of guns that are fun to shoot. So where the AR-7 would be a sole-purpose rifle that I'd never take to the range, the 10/22 Takedown fills both roles quite nicely.

The whole idea was to make something that didn't scream "GUN!" when you walked out of your front door. And to that end the Takedown's design is perfect. However, the carrying case that comes with the gun is a little less discrete.

Yes, nothing says "move along, nothing to see here" more than a black bag with MOLLE straps and a big, attention-grabbing red logo from one of the most popular firearms companies on Earth. Not really all that well thought out, eh? But while the exterior might not be as subtle as I'd like, the interior is perfectly designed. 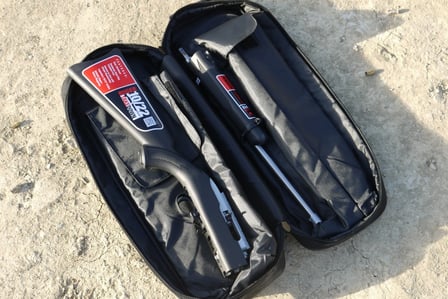 The pockets on the front are designed to make your range trip that much more enjoyable, and even come with some suggestions. There's a full-size cardboard cutout of a Ruger SR-22 handgun in the top pocket to suggest that it might be the perfect thing to slip in there to compliment your 10/22. And you'll find some similarly full-size cardboard cutouts of extended 10/22 magazines in the lower pocket. There are even specifically designed pouches in there to keep the magazines from bashing against each other.

On the inside there's room for the receiver in the left hand pocket and room for two barrels on the right, each with their own sleeve and velcro flaps to keep them in place. It's cleanly designed, and the bag's great for grabbing and heading out to the range.

The rumor is that additional barrels will be made available shortly.

The 10/22 Takedown is available right now in either the standard version or with a threaded barrel. And it's hard not to think that extra pocket in the bag means Ruger will be offering more barrels as a standalone upgrade to the stock rifle. The ability to have a new barrel shipped straight to your door with no FFL required is very appealing. That'll mean your 10/22 can easily keep pace as your shooting skills grow. 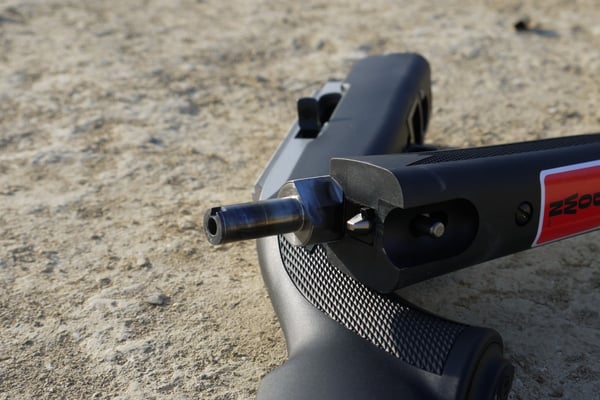 The ability to remove the barrel makes the Takedown a whole hell of a lot easier to clean than the traditional 10/22.

The ability to access the chamber and shove cleaning rods down the barrel without fear of getting more crap in the receiver makes cleaning a breeze. And while the bolt still isn't exactly easy to clean, it's easier without the barrel in place.

Enough about the features, let's talk about how the thing actually functions on the range. 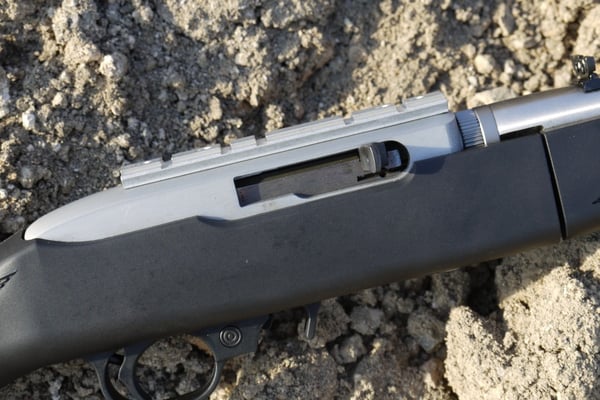 In terms of accuracy and performance, its par for the course for a 10/22.

The trigger is a tad squishy and not exactly "crisp." Accuracy (even with match grade ammo) is just about quarter-sized at 50 yards. But the real party trick comes when removing and re-seating the gun.

The more astute of you may have noticed that the scope mount is on the receiver, which separates from the barrel for storage. Normally this would screw up your zero and wreak havoc with accuracy. But thanks to Ruger's ingenuity there's an adjustable ring that keeps the connection between the receiver and the barrel nice and tight no matter how often you take it apart. With that wobble-free connection, the worst change I saw after disassembling and reassembling the rifle was a difference of about an inch at 50 yards. 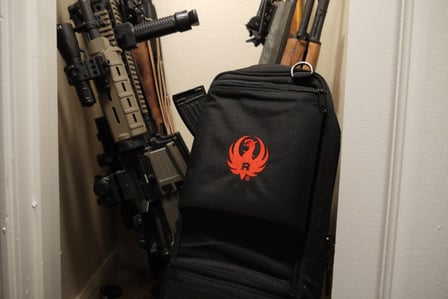 In short, what we have here is a brilliant improvement on the classic 10/22 design. They didn't just slap a new barrel on it or change the color, they actually taught an old dog new tricks. And they did it brilliantly. While I could sit here and pontificate on how great this thing is until the cows come home, the best endorsement is this: when I was finished testing it, I sent a check back to Ruger instead of the rifle. There's no way this thing is leaving my collection -- to me, it's just too perfect a training tool for new shooters.

All ratings are relative to other similar guns, and the final score IS NOT calculated from the constituent scores.

Accuracy: * * *
Compared to other 10/22 rifles, its about average. Nothing spectacular, but no one expects Anschutz-level craftsmanship here.

Reliability: * * * * *
Never had a problem. Ever. And thanks to the ability to break the thing apart, it will be even easier to clean!

Customization: * * * * *
Not only does the rifle come with a scope rail, the rumor is that additional barrels will be available soon, too. That's some pretty serious customization ability right there.

This is one of those situations where the whole really is greater than the sum of its parts. A superb rifle for new shooters or those looking for a survival rifle.