But there's always something that bugged me about them. The basis of the guns are a metal chassis, but in order to make the frame they mold the chassis into the frame itself. That always struck me as a lazy solution to the problem of integrating metal and plastic to form the firearm, and apparently the guys at SIG SAUER thought so too. Building on the earlier P250 platform, they've created a truly modular striker fired handgun in the P320 . . .

While I touched briefly on the impetus for the modular design in my first impressions article, there's another facet to the need for a modular handgun: the military. Tired of needing to buy multiple handguns to suit different roles (carry guns for military police, combat firearms for soldiers, concealable compact guns for investigators) the military has been wanting to replace their existing hodgepodge collection with a single model that can be configured on the fly to meet any mission requirement.

The drive to find the one gun is called the MHS or Modular Handgun System competition, and should be kicking off within the next few months. While SIG was always keeping the civilian market in mind, the true reason behind the P320 is the military's MHS competition.

While some firearms can arguably be called modular (a caliber change kit or interchangeable backstraps perhaps?) nothing really comes close to the P320 in its ability to change almost every major feature of the gun. The pistol disassembles in just a few seconds into its constituent parts, and the entire metal chassis of the gun -- the serialized part that is technically the "firearm" in the eyes of the ATF -- slides completely free of the frame. That chassis is also designed to fit exactly into the existing grips for the P250, meaning that there are already aftermarket parts available that will fit the 320.

In case you haven't figured out exactly how big a deal this is, let me give you some examples.

Instead of needing to buy a completely different firearm for your big-handed self and your small-handed girlfriend, now you only need to buy a new smaller frame for her at a cost of about $50.

If you want to change from a 9mm to a 45ACP gun you don't need a new firearm, just pay $350 to your parts supplier of choice and a conversion kit will arrive at your doorstep with everything you need to get running with your new chosen caliber...no FFL required. Or if you want to go from a full size gun to a compact carry version, $400 for a new barrel and grip is all you need.

And if you decide become a shade tree gunsmith with a soldering iron and add some aggressive stippling to your firearm -- and then immediately regret your decision -- you can replace the grip cheaply and easily.

But for competitors, the biggest benefit might be the ability to take your trigger group of choice, the one you've polished and tweaked and perfected to get it just the way you like it, and swap it between guns without any issues. Another benefit of the 320's easily-removed metallic bits is that you can clean the gun remarkably easily. No muss, no fuss, no trying to shove Q-tips into hard-to-reach nooks and crannies.

So, the gun is a technological step forward. But the real question is how well it works on the range, and for me it's something of a mixed bag.

The gun really does feel slick. The finish on the slide is as satin-smooth as any of their other firearms, and the overall design is extremely appealing. They've departed from the traditional SIG-y look a little bit and took a chance, and it seems to have worked. It's a more modern, stylized SIG SAUER handgun, and personally I think it looks fabulous.

Firing the gun, it feels exactly as solid as any of the all-metal firearms already in SIG Sauer's line. Polymer handguns can tend to have a more toy-like feel to them, but the P320 is built like a brick house. Recoil is no worse than with any other 9mm handgun, and the sights are the same ones from my P226 -- slim but useful.

Instead of their traditional grip angle, SIG has gone for a slightly steeper approach. So moving from the FNH USA FNS-9 to the P320 it takes a couple of seconds to get acquainted with how the gun points, but it starts feeling natural pretty quickly. The angle is closer to what I would call "neutral" for me at least, closer to the normal cant of my hand than other handguns.

Other small improvements include metallic magazines (which everyone except GLOCK uses these days), night sights and a very conveniently placed magazine release button. There's also a full-length Picatinny rail (as opposed to the proprietary SIG rails on other guns) at the front of the gun for all your attachment needs.

SIG's Kevin Brittingham wants me to start using this as my competition handgun. And while I agree that it has some great features, there are two specific issues that give me some pause about making the switch. 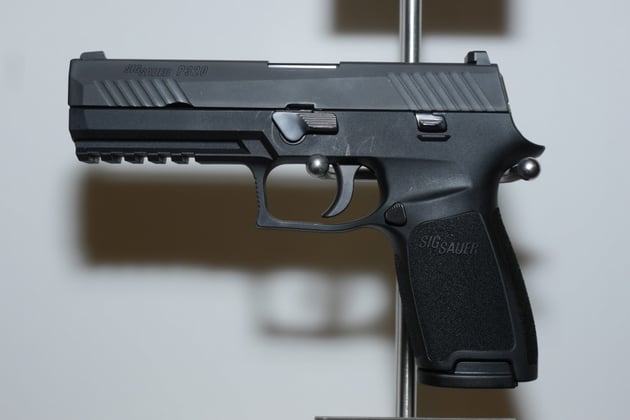 Issue #1 is that, as-is fresh out of the box, the 320's trigger isn't perfect. But let me give you a little back story to illustrate how small of a nit-pick this is.

The effect of that 90% setting is twofold. First, there's no segmentation in the 320 trigger -- it's a solid piece and feels like any of their other triggers, which I like. But second, the way the trigger breaks due to the artificially increased pull weight just has too much roll for my preference. I like crisp and clean triggers, and this gun doesn't have one.

That's not to say that the trigger is bad. It's way better than either the stock GLOCK or S&W M&P triggers. It's just not perfect. Yet. The good news: replacing the trigger is easy as pie when they come out with a new version. 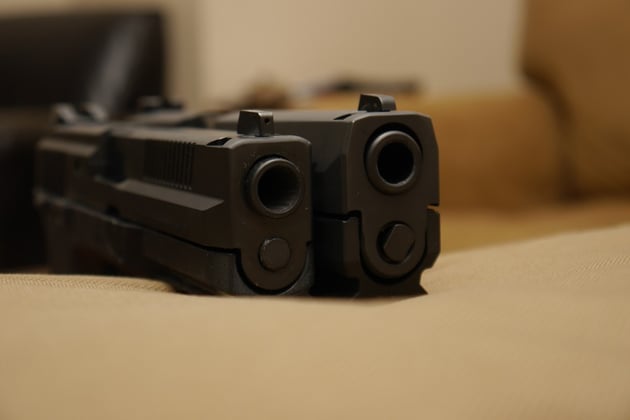 Issue #2 is the height of the gun. As with all SIG SAUER's handguns, I find that there's more material above my hand than with other brands. A higher bore axis means that it has a longer arm and therefore more felt recoil. But it's no more than I feel when I fire my P226. That higher bore is a function of the way the metal trigger insert is designed, since it can't protrude down into the magazine well (where most polymer framed handguns hide their internal bits) and instead needs to stay above the level of the hand.

The picture above is a side by side comparison of the P320 with my FNS-9 handgun. As you can see, the P320 is a little bit bigger -- emphasis on the little. We're talking a difference of maybe 10%. But like I said, these are small issues.

So there are my two relatively minor issues with the gun. Everything else is exactly as you'd expect with a SIG handgun, including my propensity to ride the slide release and keep the gun from locking back on the last round. But as for that, they are indeed working on an improved design to put a stop from the inadvertent malfunctions once and for all. Ultimately though, the question is how well it shoots. 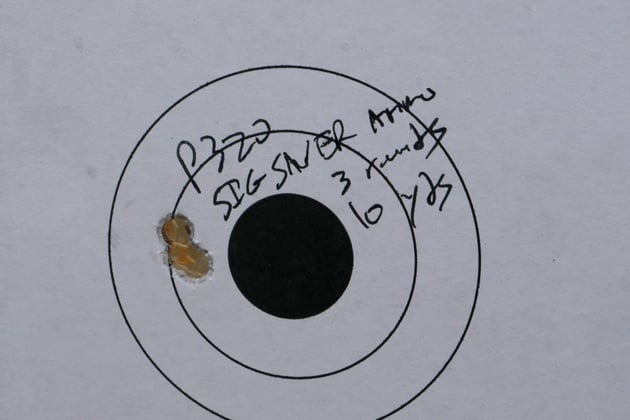 I honestly don't think I could do better even with my Wilson Combat 1911. The gun is a tackdriver.

Overall, what we have here is a truly modular handgun that actually functions really well. With the exception of two relatively minor gripes, the gun is an ideal choice for someone looking for a striker fired handgun. And based on my experience, I'd recommend this over either the GLOCK or the S&W M&P without any hesitation.

All ratings are relative compared to the other weapons in the gun’s category. Overall rating is not mathematically derived from the previous component ratings and encompasses all aspects of the firearm including those not discussed.

Ergonomics: * * * *
The grip angle takes a little getting used to for more experienced shooters, but it works. The height of the bore axis, however, is an issue.

Customization: * * * * *
Customization is what the 320 is all about. You can convert it from a 9mm long slide competition handgun into a compact 45ACP self defense gun in roughly 30 seconds. And while caliber conversion kits are yet to be released (they're on their way) the grips are already on sale. And all P250 grips will fit the P320.

Overall Rating: * * * *
It's not perfect. Well, not yet anyway. A crisper trigger would go a long way. But out of the box, the gun is about three and a half stars. Factor in the insane level to which you can customize this gun and it earns a full 4 stars. A truly modular handgun, executed with typical SIG SAUER precision.