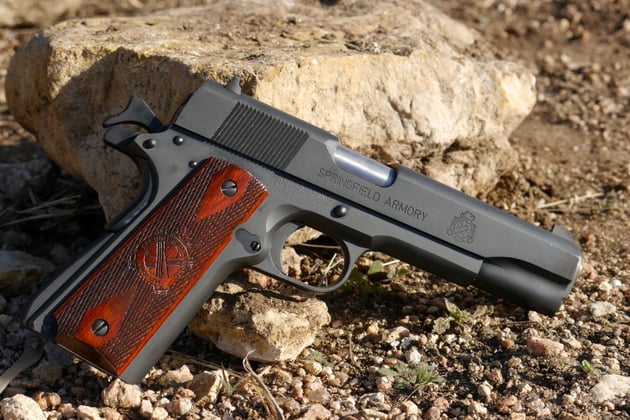 Much like a young cigar aficionado who can't appreciate an expensive Davidoff, I just didn't understand why 1911 handguns were so popular. Now I carry a Wilson Combat 1911 and haven't looked back. But there's something to be said for the original, the 1911A1, and for those looking to own a modern manufactured version of that historic handgun, Springfield offers their 1911A1 GI model that can be bought for less than the price of a GLOCK 19. But even at that price, is it worth the money? . . .

The Springfield 1911A1 Mil-Spec would, one would think, be a straight reproduction of the iconic 1911A1 handgun as issued to the troops. But you'd be wrong.

There are a number of things that keep it from being identical to the M1911A1 handgun of WWII (and earlier) fame. 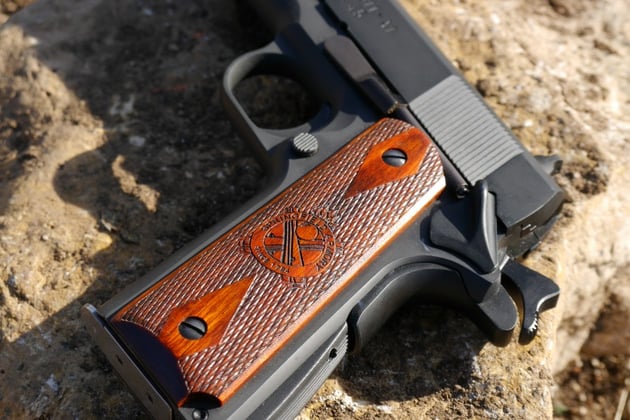 Are a shorter hammer spur and the elimination of the "double diamond" pattern in the grips, but both features are present in Springfield's 1911A1 handgun. Springfield has even gone further, adding their logo into the cocobolo wood grips and emblazoning it on the side of the gun. Not that I'm complaining -- I think it looks smashing -- but purists will notice the difference.

Other differences are on the slide.

On the original M1911A1 the serrations were vertical at a 90 degree angle from the slide, but on the 1911A1 they're tilted slightly forward. And on the ejection port there's a relief cut to allow for better ejection of the spent casings that didn't exist in 1942. These are features that are common to the newer Springfield handguns, such as the TRP and the Range Officer, so it makes sense from a manufacturing point of view to re-use the same slides from those guns on this model too, but it's not historically accurate. I know we're nit-picking here, but in a world where gun companies proclaim the release of a "new gun" for more minor changes it makes a difference. 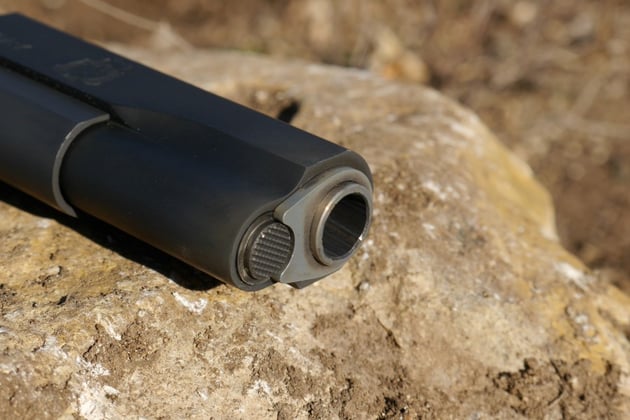 At the muzzle end of the gun there's another difference, but this time more minor:

The barrel and barrel bushing are a shiny stainless steel instead of the customary blued steel. I don't really have a problem with it, I just wanted an excuse to slide that picture in the review. 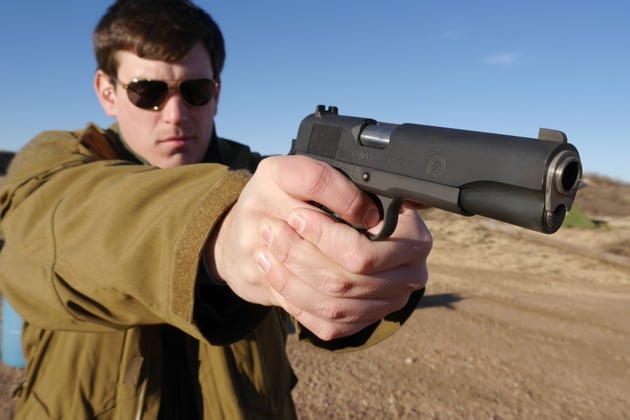 One thing that doesn't differ from the original is the finish:

the gun is parkerized, and it feels almost as if the gun is covered in a soft velvet blanket. There are some parkerizations that pretty much suck, but this one doesn't. Just holding it in your hands feels really, really nice. 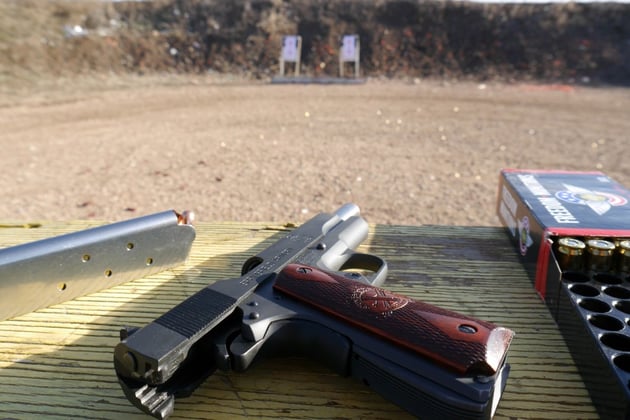 On the range, the gun runs well.

No matter what you feed it, be it brand new Winchester ammunition or remanufactured Freedom Munitions rounds, the gun keeps shooting. The gun's ability to function under adverse conditions is one of the reasons that it's still in service today, so I wouldn't expect anything less.

What's really surprising is that for a gun this cheap is that the trigger is damn near perfect -- if a bit heavy.

The break is as crisp and clean as an Irish spring morning (or at least what my soap leads me to believe an Irish spring morning would be like) with no creep and no roll whatsoever. There's about a quarter inch of prepping to do where there's practically no resistance and a slippery smooth feel, and then an eighth of an inch of overtravel. The reset is short and then you're back in business. The only complaint I have is that the trigger feels very heavy to me, but then again I'm used to dangerously light competition triggers. Nevertheless, even with the WWII style sights, the gun is dead-nuts accurate. 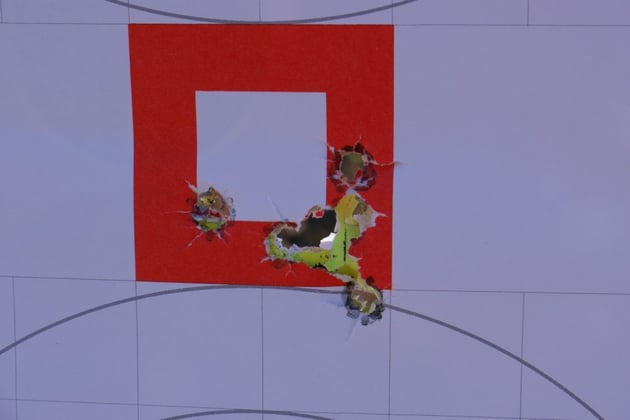 I take full responsibility for the fliers high and left, but take those away and you still have a 1-inch five round group from 15 yards. Considering the bullets themselves are about a half an inch wide that's very impressive from a relatively inexpensive handgun.

At this point, the review has been all smiles and unicorns. But there's a problem with the gun.

Every other handgun Springfield makes comes with a beavertail grip safety, and there's a damn good reason: the A1 grip safety hurts. It's way too short, and for those of us with big hands it puts nearly all of the force from the recoil of the gun into a very small space on the webbing of your hand. By the end of the first 50 rounds I looked down and my hand was visibly bleeding thanks to the grip safety. While I understand that for this to be a "true" 1911A1 it needed a thin grip safety, but with Springfield changing so many other details on this gun I feel like this one has been overlooked. Then again, it's a brilliant strategy if their goal is to get people to realize how crappy the original grip safety is and upgrade to a "Loaded" or TRP model.

Nevertheless, despite the issues with my hand the gun is legitimately fun to shoot.

It's accurate, it has a good trigger, and most importantly it runs. The best part might be that for a mere $70 you can order a replacement beavertail grip safety and smaller hammer from Wilson Combat and make the gun a lot more enjoyable to shoot. But even as-is, it's not half bad. And especially given the price, it's not a bad choice for new shooters either.

But if you're looking to buy this gun with an eye to upgrade it later watch out, because the slide is going to be an issue.

The sights on the gun are the old WWII-era sights, meaning that the front sight is permanently embedded in the slide and the notch for the rear sight won't give you many options. You can take it to a gunsmith and have them mill you a Novak cut to use some of the higher end sights, but that's going to take some money and depending on the skill of your gunsmith it might not come out right. Tyler's friend recently ran into that issue when he sent a 1911 in for some new sights and they came back slanted. I'm not saying it's not possible, just to be aware and be careful. 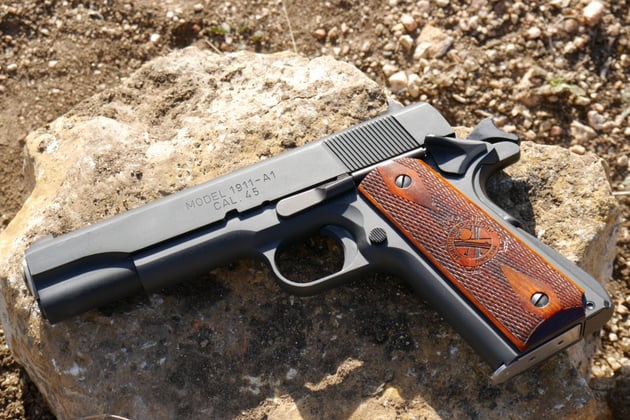 The real question is whether it's worth the money, and that depends. If you have your heart set on a 1911 handgun, then this might be a good entry level purchase that you can add those parts I mentioned and make it into a great shooter. If you're looking for a competition handgun, then the money and time you'll spend on modifications alone might make it a better idea to buy a Range Officer or something similar. And if you're just looking for a home defense gun in .45ACP then I remind you that a Glock 21 is only $200 more, holds three more rounds, and comes with an accessory rail built into the gun. In short it all boils down to preference. For some people the 1911 is just too pretty to pass up.

All ratings are relative compared to the other weapons in the gun’s category.

Ergonomics: * * *
The gun feels soft and smooth, until you try to grip it. Then the grip safety digs into your hand and things start going wrong.

Ergonomics Firing: * * *
Recoil is damn near pleasant, but OH GOD THE GRIP SAFETY!

Customization: * * * * *
The 1911 is one of the most heavily customized firearms in existence. There's no doubt that you can pimp this thing out however you want, and it'll be pretty cheap to do it.

Overall Rating: * * * *
For the money, it's a good gun. With a little work it would be a great gun. The only reason I dropped a star is because RIA has a similar offering at a cheaper price, but the quality difference between the two is obvious.