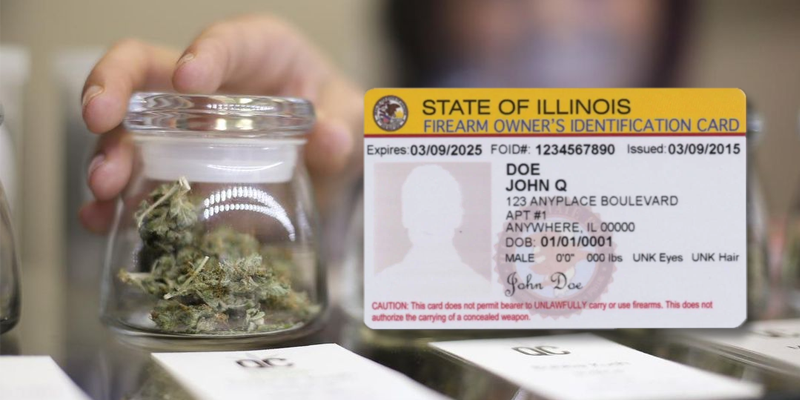 Marijuana In Illinois & FOID Cards | What you need to know

Recreational Marijuana is now legal in Illinois, and medical cannabis has been legal since 2013. We have seen all kinds of misinformation spread about these subjects and how they relate to having a FOID card, so we want to clear things up as much as we can.

Will your foid card be revoked if you buy weed from a dispensary?

According to a recent statement made by ISP via their facebook page, probably not:

“The Illinois State Police will not revoke Firearm’s Owner’s Identification Cards based solely on a person’s legal use of adult use cannabis. Pursuant to both State and Federal law, a person who is addicted to or a habitual user of narcotics is not permitted to possess or use firearms. Accordingly, the ISP will revoke FOID cards where it is demonstrated that an individual is addicted to or is a habitual user of cannabis. The ISP would also revoke or deny the FOID cards of those who violate certain provisions of the Cannabis Regulation and Tax Act. The use of cannabis is still considered to be illegal by the Federal government and the purchase of a firearm from a federally licensed firearms dealer is governed by Federal law.”

This is certainly not clear cut though. Left undefined is what constitutes “addicted to or is a habitual user of cannabis” as pretext to revoke FOID Cards and CCL's.

"Per the Cannabis Regulation and Tax Act, it is illegal to transport cannabis or cannabis products across state lines. http://www.ilga.gov/legislation/ilcs/ilcs5.asp…"

While marijuana retailers must scan an ID to prove age, there is currently no reporting of that information to the State Police or DOJ.

In fact, both sellers and the state are forbidden by the Act from creating or sharing a database of marijuana purchasers (Section 10-20).

but Marijuana Possession or Use is still Illegal Under Federal Law

Possession of personal amounts of marijuana has been decriminalized in Illinois, for all practical purposes, now that you can legally buy it from state licensed dispensaries. However, decriminalization only complicates the issue surrounding guns when it comes to Federal Firearm Dealers like us.

The ATF's Firearms Transaction Record, aka the Form 4473 you have to fill out if you buy a gun asks:

“11.e. Are you an unlawful user of, or addicted to, marijuana or any depressant, stimulant, narcotic drug, or any other controlled substance? Warning: The use or possession of marijuana remains unlawful under Federal law regardless of whether it has been legalized or decriminalized for medicinal or recreational purposes in the state where you reside.”

Basically our state's marijuana laws do not supersede or suspend federal law.

so Will your FOID card be revoked if you get your medical marijuana license?

According to the ISP website's FAQ section medical marijuana cardholders will not have their FOID card or CCL card revoked, or be denied issuance of a FOID or CCL, due to their status as a medical marijuana cardholder. Cannabis is still a federally illegal, Schedule I drug. Federal firearm licensees are prohibited from selling firearms to card-holding cannabis patients, as per a 2011 open letter from the DOJ to all FFL’s. Since the ISP have record of all IL medical marijuana card holders, they know when a potential purchaser is prohibited, and consequently the department will not approve a background check. While people licensed under the Medical Cannabis Program Act are not added to the NICS database as prohibited persons, and their background check will not be explicitly denied, the tricky part is their background check will never be approved by the Illinois State Police, either.

ALL Marijuana Remains a FOID Disqualifier

Regardless of any state decriminilization of marijuana, it still technically remains a FOID Act disqualifier.

Sec. 8.Grounds for denial and revocation.The Department of State Police has authority to deny an application for or to revoke and seize a Firearm Owner's Identification Card previously issued under this Act only if the Department finds that the applicant or the person to whom such card was issued is or was at the time of issuance:

(n) A person who is prohibited from acquiring or possessing firearms or firearm ammunition by any Illinois State statute or by federal law;

So the big questions are:

Lying on a form 4473 is a federal felony crime regardless of what state law defines as an illegal user. So everyone should at least be aware a felony conviction = a loss of your gun rights.

It's also important to note that if you already have a MMJ card you can choose to relinquish it. You will still have to wait at least 366 days before your background check will be approved for a gun purchase though.

Facebook Twitter Google+
← We have finished some MAJOR upgrades, come check them out! Why do Americans own so many guns? →