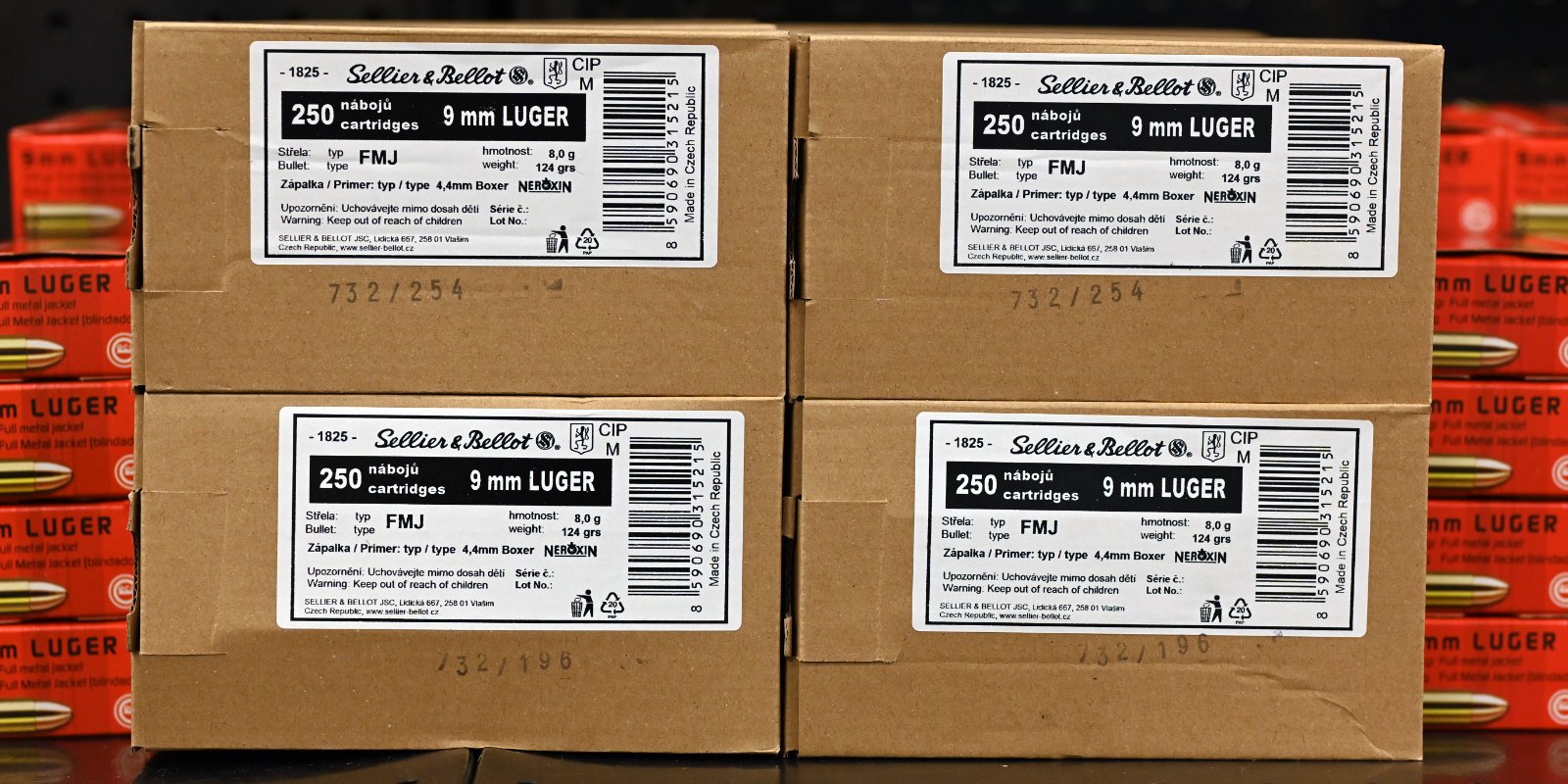 Why is the ammo shortage lasting so long?

And why is ammo so expensive?!
The short answer: Economics, and a supply/demand imbalance.

The more important question to us, and probably our customers is: “When will ammo be more available? And when will ammo get cheaper?” To answer that, let’s look at where we currently stand from both the supply ,and demand, side of the equation. And try to answer how we got here, and when the new normal may be achievable.

We’ve said it a number of times in articles and interviews: “In times of uncertainty or unrest, reasonable people will take steps to protect themselves and their loved ones. For many, those steps include having a firearm.”

It’s no secret that consumer demand for firearms has soared in the last year, outstripping the supply chain and the ability of manufacturers to produce guns.

The National Shooting Sports Foundation (NSSF) compiles background checks and adjusts them for automated pings against the system to approximate the US demand for firearms. I feel this chart needs little explanation: 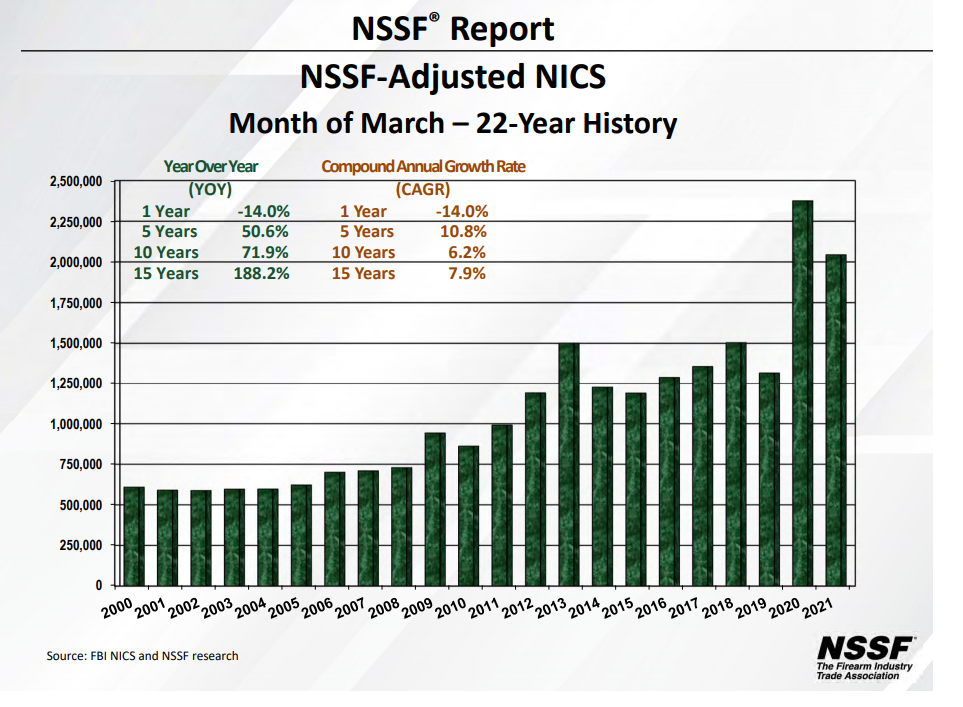 That is a 44% increase in gun sales in Illinois last year!

Nationwide, the NSSF estimates that 8.4 million people bought their first firearm in 2020, and to them we would like to say, welcome! Along with these new gun owners, we have the millions in our community who have owned firearms for years and regularly like to partake in the shooting sports.

All these guns need to be fed in order for people to practice. If every new gun owner bought just two boxes of ammunition, one for practice (FMJ) and one for defense (hollow-points or an equivalent) that alone is ~

Now add that together with individuals that already like to shoot, and you’ve got a demand shock to the market that continues.

All of 2019 and early 2020 actually found many ammunition manufacturers with excess capacity for production. Sig Sauer even moved away from making range ammo completely because of decreased demand. So when the panic buying hit, the supply chain of distributors and manufacturers’ warehouse stock was exhausted very quickly. The manufacturing capacity simply wasn’t there to make more ammo, and make it faster.

Why do primers matter so much?

Primers go in every center-fire round (basically everything we sell except .22 long rifle), and they are manufactured at only four facilities in the US. One of which is just coming out of a bankruptcy liquidation. Those facilities are owned and operated by ammunition manufacturers (Winchester and the various Vista Outdoors brands) and as demand soared, much of the primer production that would have been sold to other ammunition manufacturers or reloaders was kept in-house to make the company’s own ammo. This is why your favorite reloader  probably cannot supply you any more. This is also why one of the major ammunition manufacturers sent its production people home for 2-3 weeks: they had nothing to prime the cartridges with!  One told us early on that they consumed a three month supply of primers in a week, and that was all they had on-hand.

Much of the practice ammo consumed in the US is sourced overseas: South America, Mexico, and Eastern Europe. Because of the COVID bottlenecks in the workforce mentioned above, shipping nearly ground to a halt in mid 2020. The Baltic Dry Freight Index represents bulk shipping costs, and it is higher now than pre-COVID by 440%!  Even at these high rates, demand for containerized shipping is so high that just getting a container booked on a boat is now out 4-5 months instead of weeks. 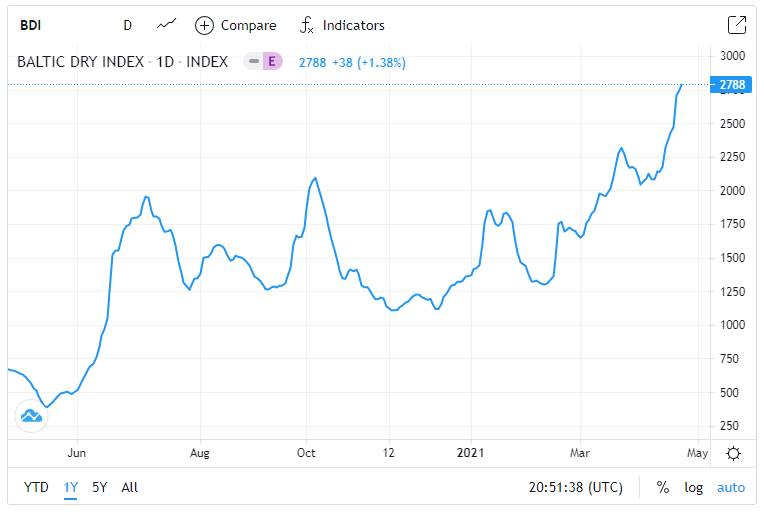 Trucking is also slow. Our last load of ammo came off the rail line and sat in a yard in Chicago for two weeks waiting for an available driver. This all adds to the cost and complexity of importing ammunition.

To sum up the supply situations now vs pre-COVID:

When will ammunition be more available and cheaper? What are the manufacturers doing about this?

Manufacturers are, for the most part, unwilling to invest in new productive capacity.  Federal’s parent company President for Ammunition – stated as much.  They were buried in excess capacity from 2015-2019 and are unwilling to put themselves in that situation again.

Vista Outdoors (Federal, CCI, American Eagle, Speer) did buy the Remington factory in Arkansas and re-start production recently, but are they making primers for their production ammo or consuming other Federal production?  We don’t know.

Imported ammunition and especially primers from Italy (Fiocchi), the Czech Republic (S&B) and Asia (Armscor) are jammed up with shipping delays, now at a 4-5 month lead time to book a spot on the deck.

We are able to bring in ammo from overseas, and we are seeing a trickle from normal channels, but the overseas ammo is *very* expensive. And the trickle in from distributors is just not meaningful in terms of demand.

We are seeing manufacturers change packaging from nice 50 round boxes, to 250 or 1000 round loose bulk packages.

This is smart: get more ammo out there, without the packaging complexity of filling the cartridge little trays.

Our distributors and domestic manufacturers’ reps tell us not to expect a meaningful increase in supply this year. Both tell us to buy whatever we can, wherever we can, at whatever price we can manage because this just isn't going to get better anytime soon.

After our costs for ammo so rapidly increased we made the decision to slash our normal ammo mark up to try and keep our customers supplied with reasonably priced ammo. I am sure it seems to some that we are still price gouging, but it is very difficult to keep a range running when we are paying 350% more for 9mm which is 75% of all the ammo we sell.

Some of the large training organizations have cut round counts for their classes or cut high-ammo-use classes. This will take a little of the demand pressure off.  Enough to offset all the new gun buyers though? Probably not.

So what does our crystal ball tell us? 🔮