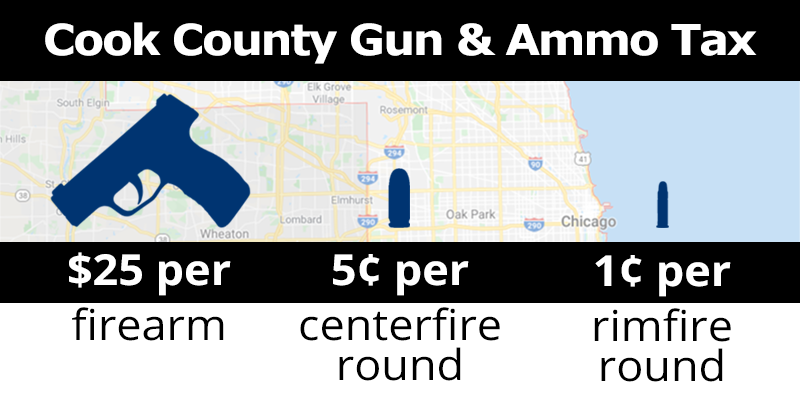 On January 14, oral arguments were heard in the 1st District Appellate Court on the Cook County Second Amendment Tax.

If you would like a textbook example of a well-prepared and articulate defense of 2nd Amendment rights, please have a listen. It's an hour long, but we go first at least. Pete patterson spoke first for US and made the point clear

"Unless the Second Amendment is a second class, right. Cook County's tax on firearms and ammunition must be struck down. That is because the Supreme Courts of Illinois and the United States have struck down taxes on constitutional rights across a wide array of rights. Yet the right to vote, the right to access the courts, the right to marry, the free exercise of religion, the freedom of the press. One thing is united. All these areas. That is that the exercise of these rights cannot be taxed."

[00:01:18] Question: "What's embodied in the Second Amendment has been subject to the police power"..."they specifically said in that case [D.O.C. V Heller] that it did not intend to disturb the existing jurisprudence about the right to regulate the commercial sale of firearms."

[00:02:37] Pete Patterson: "this is not a conditional qualification on the sale of arms. It does not regulate firearms dealers. It is a tax on the consumer"

[00:03:17] Pete Patterson: "Cook County insists it is not exercising its police power. It's exercising its tax power. And so that is under the language that Your Honor has pointed out under the Illinois Constitution, which says subject only to the police power, the individual citizens right to keep and bear arms shall not be infringed explicitly by its terms rules out a tax power application to the right to keep and bear arms"

And this is a key difference here between a licensing fee where the funds are earmarked to provide a service or accommodations, and a purely money making tax.

[00:21:54] Pete Patterson: "The regulation actually facilitates the exercise of the right, and that's the situation in which [a] fee is allowed."..."[The firearms tax] is not a fee incident to a licensing regime"..."This is a strictly revenue raising tax. And under the ordinance, the firearm tax, the county, can use it for anything that it wants. There's no earmarking of it to go to anything."

How can a fundamental right be singled out for an explicit tax such as the Cook County firearm and ammunition tax?

[00:05:00] Pete Patterson: "It's the singling out of the right for taxation that is the burden"... "The Illinois Supreme Court said the same thing in the point in case you can't single out marriage, a fundamental right, for taxation. And again, the United States Supreme Court has explicitly said that the Second Amendment is not a second class right. So unless there is going to be some different special test that applies to the Second Amendment, the right simply cannot be taxed."

[00:05:59] Pete Patterson: "Our position, Your Honor, is that if this is a tax it is unconstitutional, full stop, under all, the United States Supreme Court, and Illinois Supreme Court precedent. But if it's not a tax, if it's an exercise of the police power, it's an alternative argument. If it were construed as an exercise of the police power, again, it is preempted by the plain terms of the Firearm Concealed Carry Act and the FOID Card Act, which to be clear, this tax applies exclusively to FOID card holders because it only applies at retail sale in the state of Illinois."..."this tax is exclusively on the backs of law abiding FOID card holders who the evidence shows that criminals do not purchase firearms at retail"

Cook County says the 2nd Amendment is NOT a fundamental right

ASA Cristin Duffy on behalf of the Cook County Dept. of Revenue:

[00:39:47] "The Second Amendment is not a fundamental right. Because if it was, it would be subject to strict scrutiny. And as you can see here, it clearly should be, if anything, intermediate scrutiny."

[00:43:36] "I would suggest that this is simply a condition and qualification on the commercial sale of firearms and it is a tax and under home rule under section seven BH. So we have the Home rule that allows us to tax and is carved out separately from the police power, and so we would be able to tax firearms under that provision"

We don't know what the timing of the court's decision will be, but rest assured we'll keep our readers posted.