Why do Americans own so many guns? 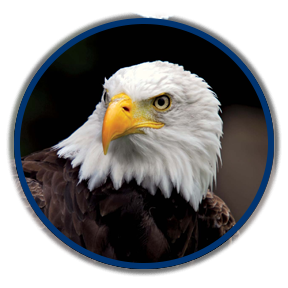 America without question is the most well armed country in the world.

It is important to note that these numbers below are most likely an underestimate, as many people do not feel comfortable admitting they own a firearm, and there is no federal firearms registry in the United States. 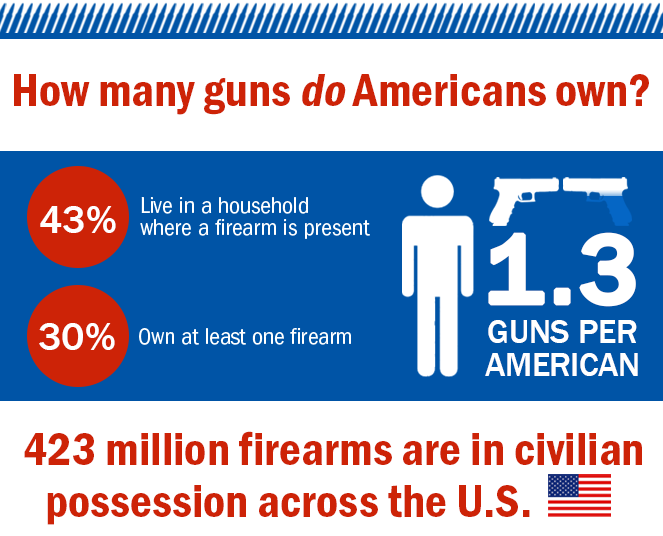 While it is true that the right to firearm ownership is written into our Constitution, perhaps more significantly, it is part of the Bill of Rights.  "A well regulated Militia, being necessary to the security of a free State, the right of the people to keep and bear arms, shall not be infringed."

But even with the 2nd Amendment being a solidified, established, and an unquestionable right, it is still very much worth pondering and answering the question:

"what is the allure of guns that is so unique to American culture?"

It would be easy to argue that the proliferation of guns in America is due to so-called “easy access”, but I believe the true answer lies much deeper and is due, in part, to historical, individual, and experiential motivations.

America is a country born out of rebellion; we literally fought our way to freedom from British rule, and our very independence is forged in blood.  243 years later, the gun is – and will always be – both a figurative symbol and literal tool of freedom, independence and self-reliance. As the Winchester Repeating Rifle changed the course of the Civil War, so today do common modern pistols and rifles serve as the great equalizer against those wishing to do harm to anyone who is physically weaker, disadvantaged or otherwise vulnerable; both to the individual and collective citizenry; the elderly, the disabled, the single mother and anybody wanting to take responsibility for their own safety. Some reading this will surely say that such thinking is rooted in paranoia and fear mongering, there is no harm though, in preparedness, made possible by firearms and honing the skills necessary thereof.

Just as advances in the automobile industry have reduced accidents and fatalities, so to do firearms. In a time where crime rates continue to fall (and rates of firearm ownership are going up, according to F.B.I statistics – guns continue to save lives.

You don’t put on your seat belt every time you get in a car because you think you will get in an accident – but you will be prepared if one does occur. Firearms should be thought of in the same way.

To that end, research by the Centers for Disease Control indicates that there are approximately one million to two million defensive gun uses annually – a statistic often forgotten, if not intentionally ignored in order to maintain the commonly held belief that guns and gun owners are a source of violence, something to fear and should be demonized. If, however, the prevalence of firearms in society was a problem, then the 17.25 million people that hold concealed carry licenses single handedly dispels this misconception.  In fact, a recent study has shown that concealed carry license holders are more law-abiding than off-duty police officers (note that this does not include the 13 states with Constitutional Carry laws, where concealed carry permits are not required to legally carry a firearm outside the home).  An even more recent report (June, 2018), specific to the state of Illinois – the last state in the Union to allow concealed carry in 2013 – shows that concealed carry permit holders continue to be extremely law-abiding.   Deaths through the use of firearms should by all means be a part of our discourse (nearly 40,000 in 2017 [the most recent data] – but 60% of those are suicides; and still the remainder includes justifiable homicide and accidental shootings – according to the Pew Research Center), but so too should be the countless lives that are saved through the legal defensive use of firearms.  There also needs to be a distinction drawn when discussing American gun culture between legal gun culture and illegal gun culture.

So, why do Americans own so many firearms? 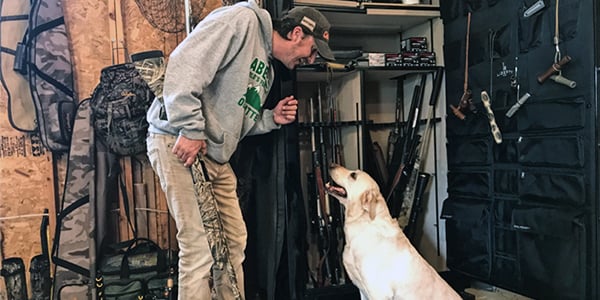 Are there practical motivations as there are historical and personal?  The short answer is yes. The first and most important thing for any legally armed civilian is – or at least should be – how accurate they are with their firearm of choice.  It doesn’t matter how reputable, reliable, accurate, nice or expensive a particular brand & model of gun is – if a shooter cannot shoot accurately with it, it is worthless. Beyond that, a firearm is like a good pair of shoes; if it doesn’t fit your hands comfortably, accuracy will either suffer at best, or be nonexistent at worst.

Anyone who comes into the world of recreational shooting sports very quickly realizes though how not only are the above numbers possible, but are also the norm and commonplace.  This is because every firearm has its own unique characteristics: ergonomics & grip angle (how it fits in the hand), recoil impulse, physical weight, trigger weight & length, barrel length, just to name a few main points. All of these aspects affect the shooter and the shooting experience. In essence, the more you shoot, the more you come to understand what works for you and what does not.  There are guns that I have shot – guns that belong to friends of mine – that they are very pleased with, effective with, and ones that they thoroughly enjoy – but these same guns in my hands just don’t work for me, whether it’s because the texture of the grip is too rough, it hurts my hand, due to the angle of the grip, or the controls are not easily accessible. Suffice it to say that in large part, things come down to personal preference and fit.

Learning how to shoot every type of firearm is both fun, and challenging.

This is especially true of handguns. Because every firearm has its own unique characteristics, shooting any firearm is going to be its own experience.  How you hold it, where you hold (in terms of point of aim vs. point of impact), how you react to recoil, muzzle flash and how accurate you are with one pistol versus another all vary from firearm to firearm and person to person.  All of these aspects are even that much more important once the realm of carrying a firearm outside the home is entered – which is yet another reason Americans own a lot of guns.

Carrying a firearm means that, not only does all of the above have to be considered, but also comfort, reliability and familiarity, first and foremost.

Reliability because what you carry is a tool that may be needed in an instance to save your life, comfort because it is on your body all day, and familiarity because deployment and execution of that firearm needs to be built into muscle memory and second nature (which delves into the matter of holsters, but that will be a separate article for another time).  If you carry then you very well may have firearms for different occasions. A little 3” subcompact Springfield XD for when you’re in the office, (employer policies vary), in business attire and need to be able to tuck in your personal protection device under your shirt and be incognito better than agent 007 or Ethan Hunt, but can loosen the belt and breathe so-to-speak during the weekend while out with family, where it doesn’t matter (as much) if you “print” a little bit or are “busted”. If you live in a state where it is legal to open carry (44, of 50 states and D.C.), you may have pistols dedicated to open carry. By that same token, you may have pistols dedicated to just home defense and others for carry. Some guns are popular simply because they are historical and iconic (i.e., Beretta 92, John Browning’s Model 1911 A-1 or a classic revolver).

Then there’s the matter of building custom rifles.

Building AR's is both fun, and from a practical and economic perspective, allows you to customize exactly what you want, tailoring to the amount of money you want to spend (a federal background check is still required to obtain a stripped lower receiver).  You may want to have a couple of A.R.s setup for different purposes. One for home defense and thus short range, one for mid to long range, an A.R.-10 when you need to go the distance, a lightweight A.R.for competitive shooting, an A.K.-47 – well – just because it’s an A.K. and a bolt-action for bench-rest shooting.  Each of the aforementioned rifles have different purposes, optics and serve different needs. Same rule applies to handguns. Sometimes it’s a Glock kind of day, other times it’s a Dan Wesson 1911 or six-shooting revolver wheel-gun Sunday kind of day, and still others it’s hard to decide on anything, so you bring a little of everything [to the range].

And finally, Americans own a lot of guns because... we can!

We live in a country, where, even today, the individual right to keep & bear arms is constitutionally protected. The truth is, Americans neither need to explain nor justify why we collectively own as many guns as we do. So long as gun ownership is approached in a responsible and safe manner, we are all – gun owners and non-gun owners alike – that much better off and safer for it.

The indulgence in, and enjoyment of, firearms is no different than enjoying any other hobby.

Gun ownership stems far beyond just being a hobby and has far-reaching legal, constitutional, cultural and personal implications. The difference is, compared to anything else, gun ownership is shunned, shamed, undervalued, misunderstood and something where character traits are unnecessarily and wrongly assigned, such as that gun owners are violent, aggressive, ill-tempered, unintelligent & simple, involved in criminal behavior, looking for trouble/are trigger happy, attention-seeking testosterone-hungry emasculated showoffs.  It is a perception that is both false, dramatically exaggerated and one that needs to change – but change can only happen through exposure, education and personal experience.

The point thus is that it should be becoming clearer and easier to see why Americans own an estimated 423 million firearms and 8.1 billion rounds of ammunition.

From self-defense applications, to hobbyists who enjoy shooting for sport and competition, it should be more understandable how and why someone might own a so-called “arsenal” of guns. If nothing else is taken away from this article, please remember this: owning – and certainly carrying firearms - is a great responsibility.  A firearm is only as dangerous as the person holding it, and if you are responsible enough to own one, you are responsible enough to own 100 and vice versa. Firearm ownership should not be a point of judgment, condemnation, demonization or shame. To the contrary, it should be a point of pride and thankfulness – in the freedom that we have uniquely as Americans to exercise 2nd Amendment rights – and all other rights this practice affords us; and the fact that the right to bear arms is the Second Amendment, within the first ten amendments, known as The Bill of Rights, cementing it as a basic and fundamental civil right is profoundly significant and not to be forgotten.